A Role for Turmeric in Keeping Your Teeth & Gums Healthy

Though it’s sometimes called “Indian saffron” due to the bright yellow color it gives to the foods it seasons, turmeric is popular in many cuisines across southern Asia and into the Middle East. You may know it best for its use in curries or tagines.

But turmeric can do a lot more than just add flavor. Because of its antimicrobial, antioxidant, and anti-inflammatory qualities, it has long been used medicinally, as well. Most of its power comes from the main polyphenol it contains: curcumin. Among other things, according to a 2017 review of the science,

It aids in the management of oxidative and inflammatory conditions, metabolic syndrome, arthritis, anxiety, and hyperlipidemia. It may also help in the management of exercise-induced inflammation and muscle soreness, thus enhancing recovery and performance in active people. In addition, a relatively low dose of the complex can provide health benefits for people that do not have diagnosed health conditions.

And it may play a role in supporting oral health, as well.

One review of the research on whether curcumin might protect against caries, or tooth decay found that all but one of the 13 studies that met the authors’ criteria provided evidence that it very well may. 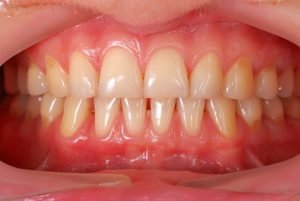 For one, it was found to slow the growth of S. mutans, one of the main types of bacteria involved in the decay process. (Other research has similarly shown that it inhibits P. gingivalis, one of the main players in gum disease.) Curcumin was also found to slow acid production by oral bacteria – an activity that kicks off the decay process by damaging tooth enamel so pathogens can enter the tooth.

Curcumin, the authors conclude, appears to be “a natural, accessible, safe, and inexpensive agent to increase oral and dental health,” although randomized, controlled trials are still needed to confirm its effectiveness.

Far more research has been done on curcumin and periodontal (gum) health. One review published this past summer looked at studies of various treatments, such as injecting a curcumin solution or a sustained-release form of the polyphenol into a patient’s periodontal pockets after scaling and root planing (a/k/a “a deep cleaning”). Either way, all common markers of gum disease showed improvement after just one month.

The use of curcumin, the authors concluded, may be

a simple and inexpensive therapeutic strategy for periodontal disease due to its broad-spectrum antibacterial and anti-inflammatory effects.

Other research has compared curcumin to chlorhexidine, a chemical rinse commonly used to control infection after certain surgical procedures. For instance, a review published this past spring found that curcumin was just as able as chlorhexidine to reduce plaque and gingival (gum) inflammation. (Inflammation is a hallmark of gum disease and one of the common denominators that links it to systemic conditions such as diabetes, heart disease, stroke, Alzheimer’s, rheumatoid arthritis, and some cancers.)

A similar study published this past summer showed that although chlorhexidine was slightly better than a curcumin gel at reducing plaque, both controlled inflammation equally well. The gel had two additional benefits: It’s biocompatible and was better accepted by the patients who took part in the study. 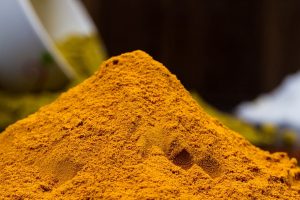 While it’s important to keep in mind that such research has been focused on applying curcumin directly to the teeth or gums, you may still get some benefit – and added deliciousness! – by including more turmeric in your diet. There’s certainly no shortage of ways you can add it to your meals.

But if you want to go the direct route – and why not? – there are, in fact, toothpastes and mouth rinses available that contain turmeric, among other botanical ingredients. A simple search for “turmeric mouth rinse” or “turmeric toothpaste” in Google, DuckDuckGo, or your search engine of choice will bring up lots of options.

You could even make them yourself! Here are some recipes to get you started – along with some other great tips for making turmeric part of your regular home care.

← Losing Sleep? Napping Might Not Be Enough to Make Up for It Why You Should Choose a Dentist Who Knows How to Treat Both TMJ Troubles & Sleep Apnea →
Contact Us to Book a Consultation